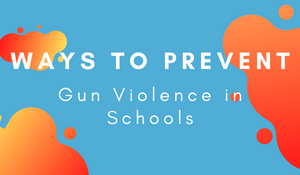 It is easy to think of school shootings as senseless tragedies beyond our ability to understand. It's also wrong. Gun violence in schools, like any issue, has its contributing factors, which we can look at and fix.

We understand that discussing how to prevent school shootings is a challenging topic. There aren't easy answers, and it's been highly politicized. That said, educators owe it to their students to face this issue and try and do something to enact change.

What Makes a Shooter?

If you want to prevent gun violence, the first step should be understanding what causes it. What leads a person, often young, to commit these terrible acts of violence?

Since the tragedy at Columbine, big strides have been made researching this topic. We know much more now than we did then.

First, most school mass shooters are either current students at the places they attack or were students in the past. These attackers tend towards being teenagers or young adults. More than half have been white.

They also skew heavily male, although why this is is a topic often debated about. The currently dominant theory is that, for one reason or another, men tend to externalize their problems and seek others to blame in ways most women do not.

Most shooters lead difficult lives and may struggle with mental illness leading up to their attack. Many are severely depressed, often combining with a sense of paranoia.

School shooters tend to have been bullied and often lack any kind of healthy "anchor," an adult in their lives who can make them feel supported and cared for.

Unfortunately, the news cycle around school shootings has often inspired further shootings. While many outlets have gotten somewhat better at this, they have essentially broadcast the personal details of shooters to the world, often making them "famous" overnight.

With all the above in mind, be mindful that every attacker and potential attacker is unique. Many deviate from the expected norms.

The Path to Preventing Tragedy

If educators want to prevent gun violence, both in terms of mass shootings and smaller attacks, we have to tackle many of the preconceptions people have about this issue.

First, preventing violence, of any kind, is not about armed guards and strategic choke points. Nearly one-third of mass shootings end in suicide; a suicidal, armed attacker who wants to do harm will do so.

Second, these attackers aren't monsters. They are broken human beings who needed help, failed to get it, and, under immense pressure, exploded into violence.

The best preventative gun violence practices target these at-risk youth and intervene. The question we need to ask is how do we save those who are on the edge of destroying their own life and those of their peers?

At least part of the answer is developing a healthier school climate. This can be difficult; it requires educators to take their blinders off and look at what kind of environment their school really is.

Is there a bullying problem at your school? Are there ways for students struggling with depression and other mental illnesses to seek help? Are students shown the empathy they deserve at a basic level?

With the above in mind, what's the best way to save lives? For now, we'll focus on the approaches easiest for those working at a school level.

It is our genuine belief that an educator's best bet to divert those on the path to becoming a shooter is a set of programs designed to give them what they lack.

At The Leadership Program, we offer programs meant to combat bullying, encourage empathy in students, make students feel more empowered and hopeful about their future, and more.

These aren't just fun, nice things to do for students who are bored or may be struggling. They help. They allow students to feel more supported and more in control of their lives.

Moreover, these programs can change your entire school climate over time. Schools and communities that foster a sense of genuine support for their students see less violence.

Schools possess the ability to do more than convey (often admittedly important) facts and figures to students. Whether educators like it or not, they are also playing a serious role in a student's emotional and social development.

We can't shy away from this fact because letting students down can have serious consequences. In the worst-case scenarios, it can and has, time and again, allowed students to fall to violence who could have been saved.

As a final note, easy access to guns undeniably contributes to mass shootings. Access to a gun, unsurprisingly, also leads to a massive spike in the risk someone will threaten another with a gun.

When one looks at the statistics, it is almost undeniable that stronger gun laws would sharply reduce gun violence in the United States. Unfortunately, of all preventative practices, this has also proven the most controversial.

The only reason we haven't focused on this more today is because it is an approach beyond what most educators are equipped for. Individuals can enact real political change, but it takes an immense amount of time and resources.

You Can Combat Gun Violence in Schools

Gun violence in schools does not need to be a looming constant that we all sit in fear of. Educators, with the right resources and programs, possess the ability to divert students away from tragic, violent outcomes.

If you want to know how we can help, schedule a consultation with us. We'll review your school's unique situation and can help tailor programs to better meet your goals.