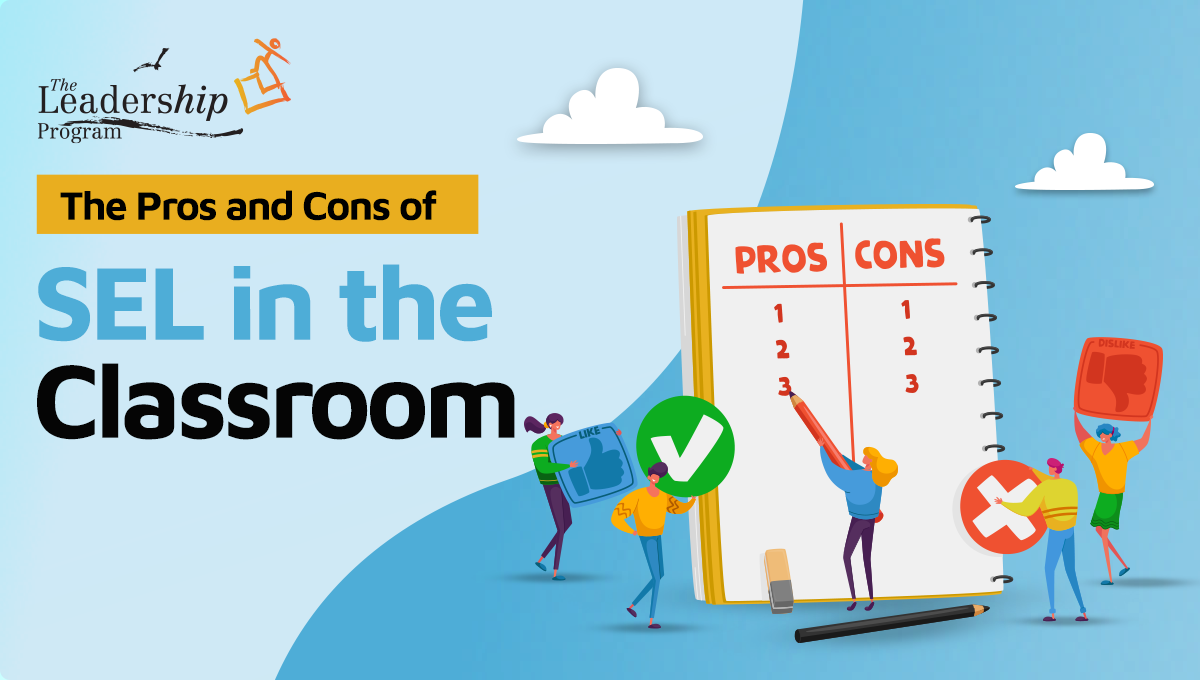 The Pros and Cons of SEL in the Classroom

SEL, or Social Emotional Learning, stormed into the limelight more than twenty years ago (although on the heels of more formalized character education programs which had been around for decades before that), and has expanded its reach into classrooms across the country, thanks in large part to the efforts of CASEL, the Collaborative for Academic, Social, and Emotional Learning.  In the aftermath of the pandemic and the emergent political and social unrest of the past year and a half, the topic of SEL has a particularly fresh urgency about it in school districts everywhere as children prepare for their first “normal” school year in two academic calendar years.

But is SEL good or bad? Does it help or hurt? Is it a waste of time or an important addition to our children’s school day learning? What are the Pros and Cons?

Like with any topic, you can find arguments on both sides of the fence. Let’s spotlight a few of the common ones:

Cons, Argued By The Critics:

As a school board in Idaho recently found out, many parents and community members feel that the skills that SEL aims to instill in our students are skills best left to be taught at home, and school-wide efforts to embrace SEL feel like some kind of “progressive educational movement” that serves only to detract time, attention, and funding away from what “matters,” which are the core academic subject areas.   Critics in this camp can lean toward the extreme end of this, believing that SEL is designed to “erase parental rights” and “brainwash” their children with government-approved programming.

Much of the work of SEL focuses on the five core competencies as defined by CASEL: Self-Awareness, Self-Management, Social Awareness, Relationship Skills, and Responsible Decision-Making.  Critics shudder to think, then, about who decides what those things mean? If my definition of “self-management” in the classroom means students will sit still and never speak out of turn-- is that “right”? If my idea of “responsible decision making” is informed by my own religious ideologies, is it SEL skill-building a guise for me to push those beliefs onto you? The critics in this camp struggle mightily with the “Who decides?” argument when trying to determine what types of programming and content they would feel comfortable allowing into their school buildings.

As Yang Zhao points out in “Another education war? The coming debates over social and emotional learning,” districts and classrooms have been known to pick one skill or curriculum to work with, and call that one singular skill their approach to SEL, which leaves the idea of “SEL” a vague pick-whatever-suits you umbrella category that just about anything can fit under. Which begs the question: What is it exactly? Is it “character education”? Are we teaching our students “life skills”? Is it “grit,” is it “empathy,” are we talking about a “growth mindset”? Do we want to build “resilience,” are we trying to incorporate “restorative practices”? Are we focusing on “tolerance” or “bullying prevention”? Is it all of the above? How could it be all of the above?

Pros, Championed By The Advocates:

Champions of SEL cite study after study-- all the way back to our basic idea of a “hierarchy of needs”-- that indicate that if a student is overwhelmed by stress, trauma, fear, sadness, worry, or any strong negative emotion, it will impact that student’s ability to learn the academic skills required of them.  Likewise, if a student is in a place of positive “flow”-- if they feel safe, happy, content, or motivated, it will enhance that student’s ability to learn the academic skills required of them. In a 2019 conversation between EdSurge and Christina Cipriano, of the Yale Center for Emotional Intelligence, Cipriano cited that “We all have different triggers of stress throughout our life and different emotions that can hijack our body’s ability to be able to process the world meaningfully. If we're not able to regulate or down-regulate in a given situation, we're not able to be available to process the information of what we're being taught. So, regardless of how fantastic your teacher may be or how incredible that science curriculum is at engaging and motivating you, if you have a student who's dealing with stress or trauma or unable to kind of get over the interpersonal interaction they had right before they entered that classroom, or the trigger word that the teacher said, like “pop quiz,” that set them off into a spiral, they're not going to be able to process the dynamic curriculum that's being presented to them.”

A core tenet of the “Social Awareness” competency in SEL is empathy.  And it is shortly followed by “Relationship Skills,” wherein students of SEL (of any age) are invited to consider the lens through which they view the world, and how it might differ from the lens through which another views the world.  These are incredibly powerful skills when learning to face, and positively manage, conflict. Proponents of SEL argue that equipping our young students with the language to identify their feelings and observe the feelings in others, along with the tools to work toward empathy and understanding, will lead to adolescents (and then adults) who handle conflict more productively in their personal lives and in their work spaces.   And since SEL is simply Emotional Intelligence with another name, proponents would point out the statistic put forth by the Center For Creative Leadership that claims that “75 percent of careers are derailed for reasons related to emotional competencies, including inability to handle interpersonal problems; unsatisfactory team leadership during times of difficulty or conflict; or inability to adapt to change or elicit trust.”

The core argument of those who champion SEL in our schools and communities is simply this: at its heart, SEL is trying to help our students understand and manage their own thoughts and feelings, so that they may better understand the thoughts and feelings of others, so that they may see and understand the world with a wider lens of human understanding. If we even scratch the surface of that, proponents would argue, aren’t we creating young people who are better prepared to imagine a more positive world for themselves and others? As Byron Sanders points out in “The Power of Social and Emotional Learning: Why SEL Is More Important Than Ever,” “By equipping young people with what they need to navigate the social and emotional arenas, we help them reach their potential.”

So, does it belong?

As Peter Greene points out in “Does Social and Emotional Learning Belong In The Classroom?,” the bigger question is how does it belong, and how are we framing it, for ourselves and for our students.

It’s slippery, for sure.  Trying to collect cohesive and consistent data on a subject that’s as far-reaching as the human heart and mind is proving to be…. well, difficult.   Critics and Champions alike can agree upon that.

But one undeniable fact is that anxiety and stress levels seem to be growing among our young people, and the pandemic and other events of the past year and a half have only exacerbated that.

And through that perspective, tending to the emotional and mental well-being of our young people seems like something we could all get behind.

Read more about our SEL Curriculum.