When It's NOT the Worst Thing

Happy Monday, Everyone. Our dear friend Ali had quite a night last night... a wings & whimsy night if I ever heard of one. So, today's post had to go to her, for a moment of reflection that all of us can benefit from.  Take it away, Ali!

So. Last night at about 7:30 I looked up and noticed that a 30th birthday balloon leftover from my brother Ben's party this past Saturday was completely tangled in the ceiling fan of my mother's house. A ceiling fan that's over 15-feet off the floor. And the motor was smelling like all things not right.

After two different ladders, a jury-rigged fireplace poker swiss army knife, and my very brave husband on the very last step, and then on the beam that holds the light fixtures, working and untangling the string from the motor, we finally got the balloon down (in the midst of jokes from my brother about how the balloon had found its biggest fan). We were going crazy celebrating the success of the moment, when we realized my just-barely-one-year, nine-pound puppy Ada was nowhere to be found.

Our eep of a half hour prior turned fairly quickly into an AHHHHHHHH!!!!

You see, my mom and brother live in NH. In the middle of the woods. On a literal nature sanctuary. That's 23 acres. Last week, a bear walked on over to the window, stood up, and stared at my mother's manically barking German Shephard. There's a fox behind our garage that found its end in a death that, due to the clumps of hair everywhere, did not exactly seem peaceful. There is all manner of wildlife around, including, besides the above, coyotes and fisher cats (both of which are known to attack friendly neighborhood pets and make lovely dinners of them). Here is a picture of Ada to show what an enticing meal they would have thought of her: 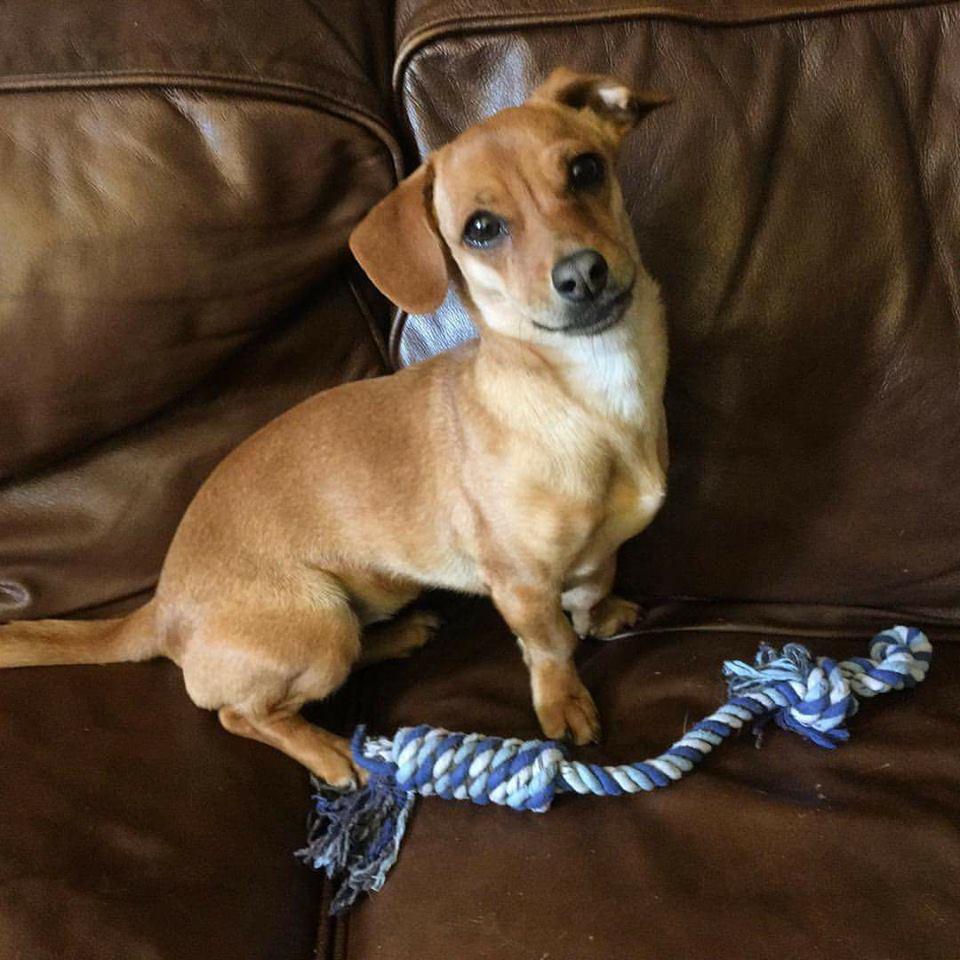 Now, my pup is ridiculously smart, but, being from NYC, is country dumb. And she is known to frolic outside if given the opportunity. With all the ladder comings and goings, and all humans in the house distracted by the balloon-fan fiasco, and after several minutes of all of us running around the house calling for her, we immediately thought something along the lines of @$^&*(*^%$#!!!! and headed outside. In the pitch dark. Armed with the only flashlights that worked in the house: our phones.

Which, it turns out, are not the most light-spreading flashlights around.

So, for the next hour, me, my mother, and my husband frantically left the house, calling, and then eventually screaming (while bawling tears [at least on my end]) looking for Ada. While we found and met three new neighbors (along with several scratches and other wood-related injuries), we neither saw (nor heard) a sign of my little dog. I called the police to see if anyone had found her; they had not. My mom trundled out in her car to search the roads, before heading back defeated, and joining my husband, Phil, is searching the forest. I took over on the road search, finding it more and more difficult not to sound like a bona-fide lunatic. In my pajama shorts.

Did I mention I'm nearly 6 months pregnant? And there are no street lights? And no one abides the speed limit?

Meanwhile, Phil and my mom went deeper and deeper into the woods in desperation.

By the time I jumped into my car to search the surrounding roads further, I knew in my heart an animal had caught her, and she was dead. I knew it.

I got about three-quarters of a mile down the road before my mom called. I was sure they had found her body. I picked up, sobbing. This was after over an hour of searching. I had no hope.

I don't remember turning around and getting back to the top of her long, dirt, driveway, but I do remember seeing Phil and my mother waiting, holding my dear sweet puppy out to me. I barely parked the car before jumping out, tears and snot everywhere, and grabbing her in my arms, holding her tight tight tight, saying "I love you I love you I love you" over and over and over again through still going sobs.

Where was she this whole time you may be wondering? Adventuring? Stuck somewhere? Lost?

Nope. When Ben found her, she was cozy and asleep on our aforementioned German Shephard's bed. We think that, when she heard us all starting to call (slightly-panicked) for her, she assumed the worst (that she was in big trouble) and hid under a couch that no one had thought to look under.

Looks like she wasn't the only one that assumed the worst here.

My mom quoted her grandmother, my granmemere, to me then: "Kids. They can rip your heart right out of you one minute, and stuff it back in, swollen, whole, and overflowing with love the next."

Fear is powerful thing, especially when we're facing what scares us most. I hope that next time I'm afraid, I won't immediately jump to the worst. I won't panic and cry and lose it. I will stay calm and hope. Hope for the best. Hope for the joyous reunion. Because sometimes, at the end of a terrible bit of time, you find just what you don't expect: that everything is alright after all.

How can you hope for the best today?

Ali Mercier, Marketing Content Manager at The Leadership Program, prides herself on her "move fast, break things" pace, eager to bring the world of Youth Development into the world of tomorrow. She insists that you find joy wherever you can in life, including (and sometimes especially) in your work. Ali earned her writing degree from the communications- and arts-focused Emerson College in Boston. Connect with her on Twitter @AliMercier.