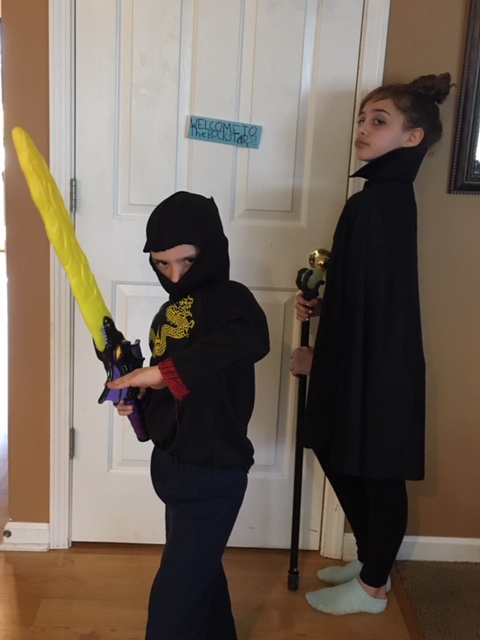 The Super Hero That IS Within

The kids and I saw the movie Shazam  this weekend. We all loved it, and afterward they immediately  grabbed their sketchbooks with the intention of creating their own superheroes.  After some initial prototyping, Dylan came up with the character of “Sir Incre-Mazing” (a combination of Incredible and Amazing), a hero who has all the powers and who has a dragon as his spirit animal that he can summon at any time to help fight off the bad guys.  Marlowe came up with “Steel Woman”, who she quickly determined was actually a villain rather than a hero.   After their sketches, they ran to their costume bins and turned their visions into reality.   Not too shabby, I should say:

Their dad took them out to dinner that night, and they remained in character and costume.  He sent me a picture of them, just out having a “normal” family dinner.  I’m sure they turned a few heads, and hopefully added a little humor and joy to the days of their fellow diners.

I was fascinated by the imagination and creativity this movie ignited in them, and I believe it’s at least partly to do with the fact that the main character is actually just a teenager who turns into a grown man when he speaks the word “shazam”.  So even though as a superhero he looks like… well, your typical superhero… on the inside he’s still just a kid. Just like them.

I’ve been turning this over in my mind, because it goes a few different ways:

In the movie, the grown-up superhero was still just a kid inside—often uncertain of what to do, or what he was capable of.  How many of us that are “grown ups” feel the same way?  By outward appearances we are expected to have it all together, to perhaps even save the day… but how many of us often just feel like a kid inside, looking around and hoping for some other “real” grown up to make the decision or take the lead? Looking for someone to just tell us what to do? Or just looking in the mirror and wondering who the heck that old lady is staring back at us?

On the flip side, my actual kids immediately imagined the superhero inside of them. Believing in amazing powers and donning bold costumes, they unleashed their inner awesome-ness, completely unconcerned with the fact that they were “just kids.”

This is a similar thought to last week’s blog, when I talked about the difference in “wishing” between kids and adults—so often there is a spirit that stirs inside of us when we are younger that starts to get muffled along the way.

I imagine it like a high cliff overlooking a deep and inviting ocean.  The adult-me stands nervously on the edge, peering over and biting my lip and uttering a series of “Errr”s and “I’m just not sure…”s and “Maybe I’ll just….”s, when suddenly I feel a wind stir up behind me and a whooping shout of delight and then in a blur I see the kid-me zip past without hesitation, leaping joyfully over the edge.  The satisfying splash below is only matched by the pure golden laughter that follows. That’s not just bravery, that’s belief.

Now, I’m not saying that just because you are a kid you automatically have that belief in yourself, and just because you are a grown up you don’t….     Because on the other other hand, we also recently saw Spider-Man into the Spider-verse, where the main Spider Man character is also just a kid, and stays a kid, even when donning his Spider Man outfit. And even though he’s been given the thumbs up/you’ve got this from Peter Parker himself, he sometimes questions his ability to step into the superhero role, simply because he is “just” a kid.

He occasionally gets trapped in that “Who am I to…?” mindset that will stop any of us on our way off the cliff, no matter our age.

I think that “Who am I to….?” Is the number one killer of our inner super hero. Because “Who am I to…?” takes belief and turns it quickly into doubt. And doubt is a quicksand that drags us down into a blurry flurry of can’ts and shouldn’ts and don’ts and – worst yet—how dare you?s.

Of course you’re the one to.

Because the super hero is in there.   You just have to believe that it is.

How can you believe in your inner super hero today?