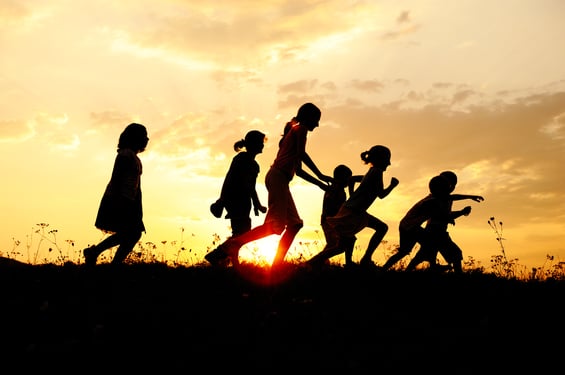 On Saturday my daughter Marlowe “ran” in the Rookie Run, a part of the 500 festival in Indianapolis—a month-long series of events and activities (including the Mini-Marathon my parents TOTALLY ROCKED last weekend) that culminates in the annual running of the Indy 500.  The Rookie Run is a block-long course in downtown Indianapolis, where children aged 3 – 12 can experience the excitement of the Mini-Marathon with a course designed for their little legs.

Marlowe did this last year, too. She had been so excited for the event that she demanded I buy her a “runner’s outfit” and she talked about it for weeks. On the day of, she was even more elated to find one of her friends as we waited in the corral so they could run together. But then—when the time came for the parents to step off to the sidelines and her group of runners to head to the starting line, she panicked. Simultaneously, her friend panicked.   When the announcer gave her group the GO! signal, the two of them started crying hysterically. So, while technically the race organizers have a no-parents-on-the-course rule, my husband picked Marlowe up and started running; her friend’s mom picked her up and started running (with her older daughter in tow, to boot!); and I ran after the lot of them, snapping pictures. I'm sure we were quite a sight.    And, the girls cried the entire time.

Needless to say, we thought that was going to be the beginning and the end of Marlowe’s participation in the Rookie Run.

And then we got downtown, I paid for her registration into the race, and five minutes later she said she didn’t want to do it after all. I could sense she was on the verge of a full-on panic. So we walked over to the sidelines to watch some of the older kids who were currently having their turn running. We talked about how she would get an awesome medal at the end. We talked about how sometimes we get really big scary feelings right before doing something that we want to do, and that doesn’t mean we don’t want to do it anymore. We talked about how cool it is to have those scary feelings and then go ahead and do the thing we’re scared of anyway. We talked about how short the course was, after all. Just a block! We talked about how this wasn’t a race about winning, this was a race about having fun with other kids. After all the talking she seemed convinced, so she and I went to wait in the corral with the other runners her age, while her dad and brother and grandparents went to find a spot to watch. When it was time for me to leave her just before the starting line, she kissed me and focused on the group surrounding her. She was ready. Excited to see her go, I scooted quickly to the sidelines.  I spotted my husband and son just across from me, on the opposite side of the course.

So both of us had the perfect vantage point to watch helplessly behind the gates as she approached the starting line and started crying hysterically. This time with none of us there to pick her up.

I tried shouting encouraging words at her, as did my husband, but I’m not sure she could even hear us, amidst the chaos and noise. And then, one of the race cheerleaders, the crowned “Indy 500 Festival Princesses,” leaned over and started talking to Marlowe. I saw Marlowe rub her eyes and nod her head. I heard the announcer say GO! and that princess—who I will forever hold in my debt—took ahold of Marlowe’s hand and ran the entire course with her, through to the finish line. (Meanwhile, my husband held onto my son and ran with her the entire time, too, on the other side of the gates, in case for one moment she lost her way.)

Marlowe got her medal. She fought her fear and, with a little help from an angel princess, she went ahead and did the thing anyway.

But yesterday, she proudly wore her medal to school, excited to show her friends.

I don’t know if she’ll do the Rookie Run again next year. Or ever. In the end, she may be right that the fear simply outweighs the fun. But I do know that she experienced a really important lesson on Saturday—if we feel afraid of something we’ve wanted to do, and we go ahead and run with that fear (while reaching out for help if necessary),  we will have accomplished more than any medal can show. Every time we do a hard thing, and come out on the other side, we are a little stronger because of it.

So, congratulations, my brave Marlowe. Your shoulders are held a little higher today, as they should be.

Something scary ahead of you?  How can you grab hold of someone’s hand and run through it?