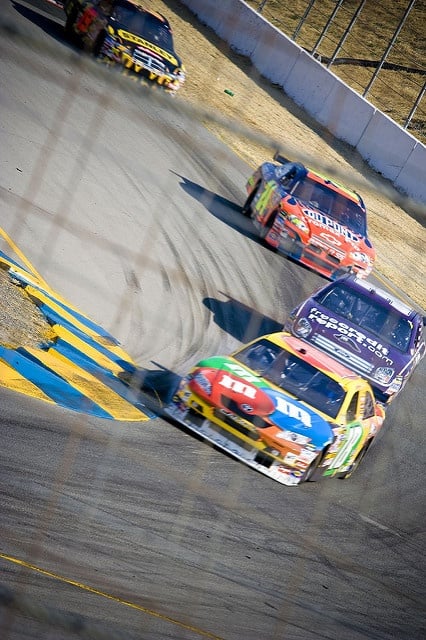 His interest was ignited at the running of this year's Daytona 500, and has just steadily grown from there. At first we'd watch a race here and there, but now we watch them every single Sunday. He owns twenty-five diecast 1:64 replica cars of his favorite drivers, and he's got about twenty more on an Amazon wish list. If you tell him the name of a driver, he'll tell you what number car he or she drives, who sponsors them, and if they've ever driven another number or had another sponsor.

Recently my mom had hip surgery, and while we were in the waiting room my brother decided to test his knowledge and he pulled up the schedule from the season. Starting at the previous weekend's race, he said Dylan, last week they were at Watkins Glen-who won?  Dylan, the week before they were at Pocono- who won? Dylan, the week before that they were at Indianapolis-who won?   Etc.   He went back probably a dozen races, and Dylan got them all right, needing a helpful hint for only one or two.

At any moment in our house we have at least three different race tracks going, most of them homemade with cardboard and tape, and be careful lest you trip over a wreck he's recreated with four cars on the floor in the kitchen, and another five in the hallway.

Prior to a few months ago, if you'd ask me to name a NASCAR driver I would have totally nailed Dale Earnhardt, Jr, the Bush brothers, and Danica Patrick, and then maybe could have stumbled over a few others; but now if you ask me that question I'll ask you to pull up a chair.

Dylan has taught us what it means when a car gets loose. What all the different flags mean.  What overtime is. What it means to go wide. What "the big one" stands for. He's told us about famous wrecks and what happened in them. He's kept us up to date about who is filling in for whom. He's taught us to appreciate the art of the burnout.  During a race, if I have any question at all I ask Dylan, and he almost always knows the answer.

Because of him, Marlowe can (reluctantly) speak like a race car afficiando.

Because of him, we went to the Indy 500 this year.  We went to the practice session for the Brickyard 400-not attending the race itself only because we were out of town.  We're heading to a drag race this weekend.  We've got sights on a hearty road trip to Daytona for next year's running of the 500.

And his passion is spreading to those of us closest to him... he shares his joy with us, and in sharing his joy, he's teaching us to appreciate it too.

How amazing is that? None of us would have necessarily thought "Oh, NASCAR!" on our own, but because of him there is a whole new world that has opened up for us to appreciate.

It's beautiful when people have a passion for something. It's fascinating to watch someone become completely consumed with just drinking in everything there is to know/do/experience within that thing.

But it's even more beautiful when others allow themselves to be ignited by that person's passion. It's like the flame of one candle lighting another. So the next time you see someone alight with passion, instead of being like oh, that's just their thing, maybe get a little closer to them and just see how "their thing" might start to rub off on you.

How can you be ignited by the passion of another today?