On Grace and Gratitude 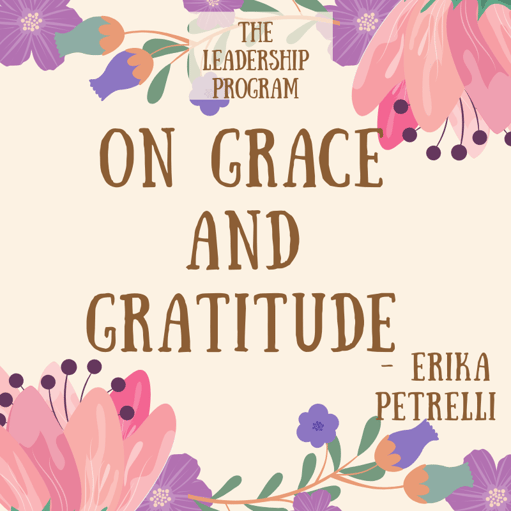 After a quick stop in Connecticut at the end of my recent trip east, I headed back down to the city on the Metro North train. I was absent-mindedly staring out the window when we passed an enormous billboard towering above some high rise apartment buildings and automotive shops in the South Bronx. It had obviously been up for a while. Weathered and faded, it contained just one word: Gratitude.

Something about the starkness of it made me catch my breath. I wondered how many people living in that section of the South Bronx ever looked up to the sky and noticed that billboard. I wondered how many of the daily commuters hustling into the city from the outer reaches of New York and Connecticut ever looked up from their blackberries and laptops in time to see that billboard. I wondered how long it had been there, who put it there, and whether there had been more to the message long before time and the elements wore it down to its simplest form.

Last week I spoke of the approach of my fortieth birthday. Marking that occasion, I felt an incredible amount of gratitude that I count the ones I love on both hands and that my entrance into this new decade was filled with an abundance of laughter, an outpouring of love, and yes, a shiny new pair of pink high top Chuck Taylors.

This birthday has also triggered in me a great appreciation and respect for the fact that some birthdays – or any special occasion or holiday, for that matter – have the opposite effect. Some birthdays can painfully magnify feelings of loss, of want, of grief. Some birthdays remind us of failures or troubles. Some birthdays are spent alone. And on those birthdays and holidays that travel from bad to worse, where the collection of things that are wrong is so high that they form a wall impossible to see over, I wonder if it's possible for us to find the gratitude for any little thing within reach that might be right.

Hanging on the bulletin board next to my desk is a clipping from the November 2011 issue of Real Simple magazine which always helps to remind me where to look for what’s right.  An excerpt from G.K Chesterton’s “An Early Notebook”, it reads,

“You say grace before meals.

But I say grace before the play and the opera,

And grace before the concert and pantomime,

And grace before I open a book.

And grace before sketching, painting,

And grace before I dip the pen in the ink.”

Our lives might be occasionally marked by big occasions, but they are so much more than that. They are a roller coaster of highs and lows, peaks and dips, starts and stops. What I feel in abundance today might disappear tomorrow. This year, it is easy for me to find the things I feel grateful for. But in the years where it isn’t, I can remember to find grace in the small things… even an unexpected billboard with a powerful reminder.

What can you say grace to today?

Interested in having Erika’s blog come directly to your e-mail each Tuesday? Have comments to share?  E-mail her at erika@tlpnyc.com.