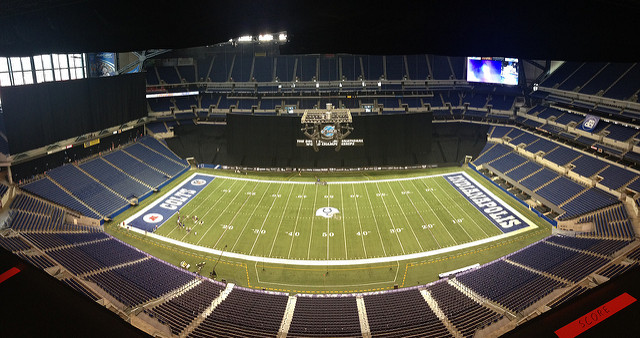 Lessons From The Football Field

What a Wild Card Weekend! Are you a football fan? I am—it’s my favorite sport to watch, by far. And the weekend kicked off perfectly, with my team—The Indianapolis Colts—winning heartily over the Houston Texans. Starting off the season with a 1 – 5 record, they have become only the third team in NFL history to make the playoffs after such a dismal start, and now have their sights set on the Kansas City Chiefs during the Divisional Round next weekend. They get better every week, and have been fascinating to watch.  It’s been the journey of a team becoming a team, with new coaches, QB Andrew Luck back after an entire season off for injuries, and several new players—they’ve had to learn each other’s language and find their collective rhythm…. in front of millions of people every week.

There were more than a few dramatic moments throughout the weekend, including a horrifying leg injury suffered by Cowboys’ Wide Receiver Allen Hurns…. again, in front of millions of viewers, that made any of us watching literally gasp out loud.  It was a painful reminder to us all of just how much these guys go through physically every week in this game.

And then there was the heartbreaking finish for the Bears in yesterday’s game against the Eagles, where their kicker Cody Parkey missed the game winning field goal in the last seconds of the game (after having kicked it perfectly moments before, only to have the Eagles call a time out as it was snapped so he’d have to re-kick it)…leaving the Eagles with a one point victory. Also, in front of millions of viewers…  and a stadium full of Bears fans who BOOED him as he ran off the field.  Ouch.

I was thinking about how fascinating it is—developing new relationships, getting sick or hurt, making mistakes… these are things that all of us deal with. Just, most of us don’t have to do it under the scrutinizing and opinionated eyes of millions of viewers. Can you imagine?

You’re putting together a new team at work or starting a new relationship, and each week you have a group of announcers following you around and commenting on your every move and decision.

You make a mistake and are instantly booed by 60,000 people and the talk of the Twittersphere. Your mistake also on a video loop—discussed from every angle. Analyzed.  Dissected. Questioned.

And yet these guys find a way to focus. They keep showing up week after week. They rebound and they move forward. They shake off the commentary, the critics, the Monday Morning Quarterbacks. They stay in the game, for as long as they are able (and when they are not able, they stay on the sidelines and cheer on those that are).

Now, most of us have a much smaller “playing field” then these guys, and certainly aren’t under the spotlight of millions….   so shouldn’t we be able to use some of what they’ve figured out in our own lives?  Here are a few lessons that I’m taking from the football field:

Focus on What’s Important/What’s Right In Front of You:

When we’re starting a new relationship or putting together a new team, we can certainly listen to the opinions of others about how it should go… but we can remember that our priority and focus is the actual people on the team itself and we can stay centered in that.

Continue to Find Ways to Support Your Team, Even if You Are Out of the Game:

When we get knocked down, or hurt, we can surround ourselves with those that genuinely care for us and focus on healing—rather than repeatedly replaying in our minds the moment that took us down. (Which could lead us down a dangerous “Why ME???” path). And then we can figure out how to encourage those still in the “game”—supporting from the sidelines.

Let the Last Play Go and Focus on the Next Play:

When we make a mistake… well, for starters we can take comfort in the fact that we probably don’t have 60,000 people booing at us, even though it might feel like we do… and we can do what the football players do a hundred times a season—focus on the next play and let the last one go. We can continue to move forward; we can try again or we can try something different or we can pivot in a new direction… but the point is that we keep moving. The mistake is in the past; the future is wide open for the taking.

Embrace the Risk to See Where it Takes You:

We can remember that every “play” has the potential to be epic. It may be epic in the good way, or it may be an epic fail….    but we’ll never know if we don’t get in—or, back in—the game. Football players, like all athletes, have learned to take big risks in front of big audiences, because they know that victory only comes when you’re willing to take risks.