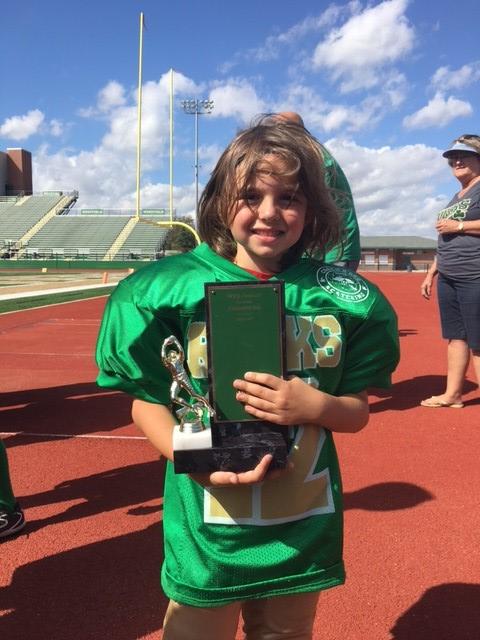 My son, who is in first grade, played rookie tackle football this fall. The season ended a few weeks ago, with his team winning the 1st grade championship. It was a spectacular finish to the season—they got to play the game on the high school football field.

Our town’s high school football team won the state championship last year, and so football is a pretty big deal here. From the start I knew this sport would be different than the others he’s tried over the past few years, including basketball, soccer, and baseball. From the first day of “evaluations,” it was evident just how seriously this program takes itself in bringing up a new generation of football players and football lovers.

The coach of the high school team held a meeting for the parents at the beginning of the season explaining that they use a program from USA Football called “Heads Up,” which prioritizes the safety of their young players over anything else. Given the recent controversy over the sport, that was good to hear. The commitment to the safety of our youth permeated from the commissioner to each of the individual coaches.

It was a fascinating process to watch my son go through. Undoubtedly the heaviest contact sport he’s ever played—and he was the shortest one on his team—with the most elaborate amount of gear he’s yet to experience. It was not easy for him, especially in the beginning. Rarely did we get through a practice without tears. And most evenings of practices had him complaining with an “I don’t want to go!!!”

But he stuck with it.

And I watched a pride grow in him that I haven’t seen come out in any of the other sports he’s played.

I think this is in no small part due to the coaches he had. Two lead coaches and one assistant… and all of them, amazing. We’ve had some pretty good coaches in the past, but nothing close to these men. They were toughest on him than anyone has been—and also the most loving. They would shout at him to get into the right position, they would physically pick him up and move him around the field… and they would also run immediately over to him when he’d been tackled to see if he was okay, pat him on the helmet, and offer continuous words of support and encouragement.

They were the perfect coaches for him to have during his rookie tackle year.

And under their leadership, he thrived.

Now, I don’t think football is in his future…  to be clear, he spent most of his time during the championship game perfecting his signature move (fake a tackle, purposefully missing the player you’re trying to tackle, and then play dead until the actual play is over), cheering on his teammates, and chatting it up with his coaches. But he was so proud. When the game was over he came running up to me and as we hugged he fought back tears… but this time they were tears of joy. He loved being a part of that team.

Football brought out a side of Dylan that I hadn’t seen before, and that I’m not sure he knew was in himself. It ignited an assertive confidence that is different from the confidence that he’s always had in himself (in spades), and I have no doubt the experience changed him, for the better, in ways that will carry on for a long time to come.

Tomorrow is the football banquet, honoring all the players. Each grade’s championship team will receive trophies. So he will get to put on his jersey one more time and proudly accept a hard-earned reward for a season he fought hard to see through.

Football was not something any of us expected him to try; including himself, I think. And it pushed him further than he’s been pushed by any other sport or activity. But because he kept walking forward, he saw a side of himself that had previously been dormant.

It’s a good lesson for all of us, I think. When faced with the voices in our head that say, “I could never do that” or “I’m not good at this” or “This is too hard”, we need to remember that as long as we have the right “coaches” by our side, both urging and encouraging us… well, I think just about anything is possible.

What “hard thing” can you try today—and who can you have by your side?