How Miracles can Happen in The City that Never Sleeps

In "Santa in New York", Ana examines a legend during the holidays to see how it can come true. Read more in her recent post. 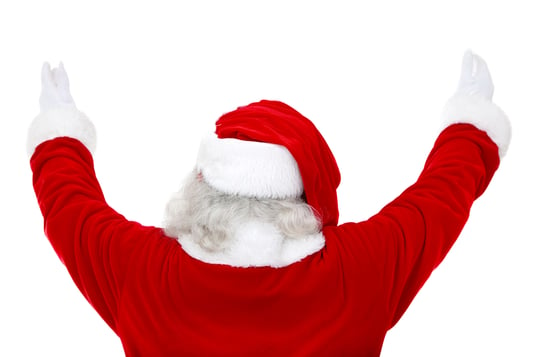 On a busy street corner, I was strategically advancing my position on the curb so that I would be among the first in line to cross when the light turned green. A man in a crisp suit walks across 8th avenue with barely a look at the street at oncoming traffic, carrying with him an untouchable sense of priority. A few seconds later, a van is honking its horn nonstop as it comes barreling down the avenue. Both make it through their paths just making it past the curbs and pedestrians. We were all on a mission to get somewhere.

People always say New Yorkers are in a rush, but the reason for their speedy schedule is often misunderstood.  It’s true that most of us move fast, usually to make up time lost from a late train, a long line, or a traffic jam. As a slow walker myself, I’ve never felt i had to move on high speed…unless I’m trying to get something else done. See most of us (New Yorkers) have a reputation for being self-centered, focused, and unrelenting. Yet if I look at our kind from a different perspective, we are usually rushing to get something accomplished, because we’re on a schedule, because someone else depends on us. New Yorkers are also known as the bravest, finest and strongest, right?

So it dawns on me, that this particular environment could be the exact right condition for the possibility of Santa Claus to be real. Just hear me out and let me speculate. Whether or not you believe in Santa Claus or the kindness of New Yorkers, all I’m saying is that I live in the place where he would most likely exist. Here’s my personal evidence: I work a few blocks from Macy’s where he has starred in countless movies, which also serves as his global headquarters, and the post office branch that processes all of his mail from children all over the world is down the street. We also have the largest Christmas tree in the country at Rockefeller Center, which is probably a tribute to him since he works around there.

In New York it is easy to understand  how he can be in so many places at one time, since he has been sighted in multiple stores, malls, bars, trains and photo studios and there is evidence of a possible cloning situation based on recent Santacon events in Brooklyn. Santa is supported by our city’s 24-hour system of food availability, transportation, dry cleaning and all his special needs which he most recently relied on to build the spectacular Wonderland on 10th Avenue that brought me to tears of joy.

Lastly, my mother came home and said that a man was giving out free toys to everyone, which she gifted to my daughter from him. And my closest friend, a self-declared Grinch and non-believer, said she would go to see him with me and our children on Christmas Eve, a dream come true made real by him, or according to her, more like the idea of him. But the absolute last investigative piece of evidence I have about the existence of Santa in New York is because my daughter told me she knew him and he was coming over tonight. So whether you believe or not, just know that the possibility of miracles can most definitely happen here.

How to Build a Wonderland http://www.chainstoreage.com/article/video-watch-build-out-target-wonderland-holiday-pop

Want to know what it is like to Live in the North Pole http://ed.ted.com/lessons/the-arctic-vs-the-antarctic-camille-seaman

Ordering out after Christmas, here’s a great new way to break bread while sharing it with those who need it

"Santa in New York: How Miracles can Happen in The City that Never Sleeps", The Leadership PRogram, Inc. 2015