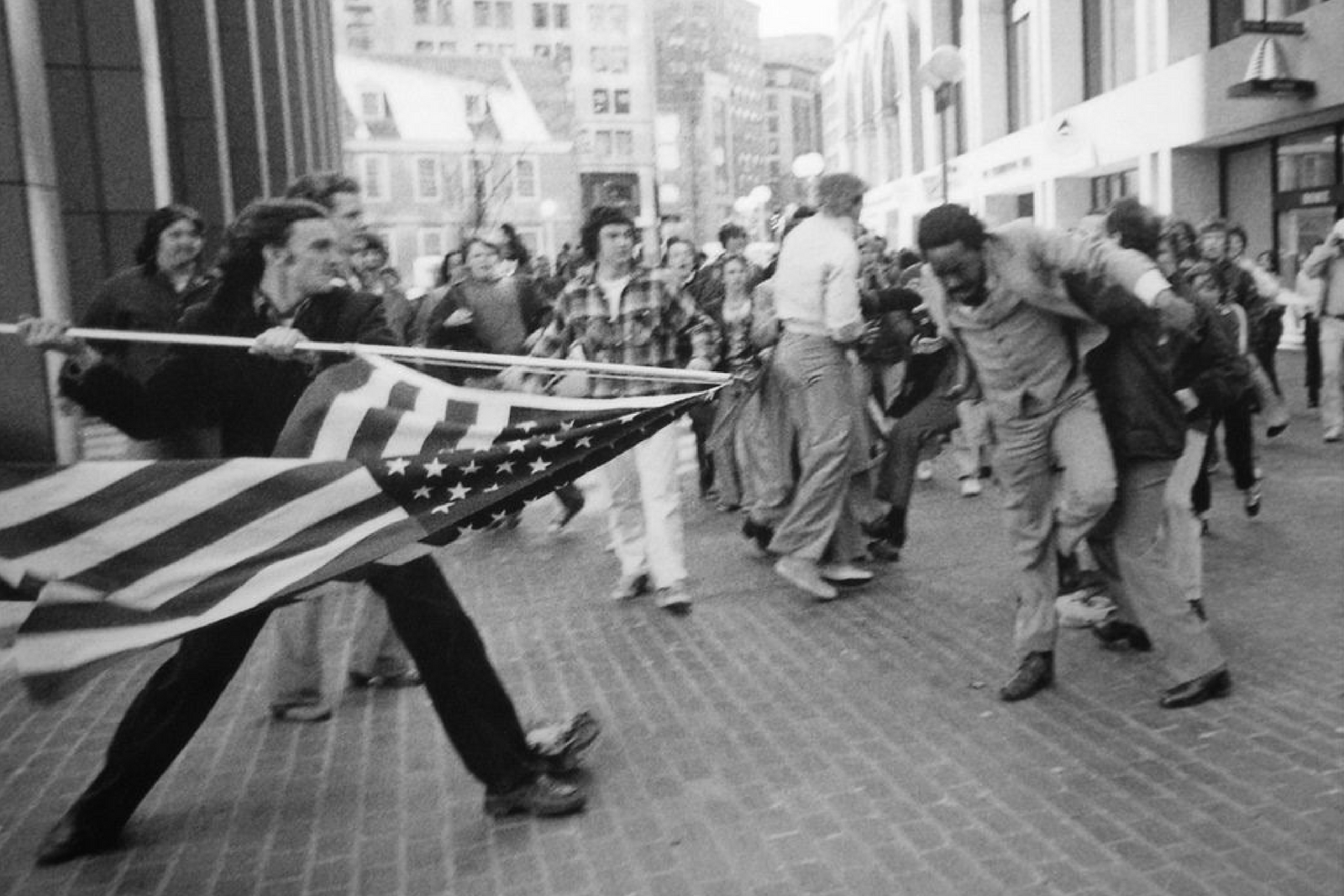 Being Right, Being an Upstander: The Quarterback, The Candidate, and Me

Erika wrote this week on “Being Right.” You can read it here, but a particular line jumped out at me: “He was so sure of his rightness that he grabbed his ‘right’ flag and went searching for someone to stab with it.” My brain immediately called up a photo taken in Boston 40 years ago, and then to an image of a football player from earlier this month, before finally landing on a bully I saw once again this morning.

A bit of a brief personal background first. I come from a long line of military service. My grandfather served in World War II, my father was in the Navy for nearly 30 years, and both my brothers saw active duty in their own right. I myself was in an NROTC program, well on my way to a commission as an officer before a medical disqualification ended that career path. To say I grew up in an environment of flag reverence would be an understatement. I always said the pledge, took my hat off for the anthem, and treated every Veteran’s Day with a high amount of reverence. My family was grounded in more conservative values (for example, whereas Kennedy’s photo might hang in my in-laws house, Ron and Nancy looked down on me from my family mantle). And while by college I found myself aligning with left-of-center politics, I still kept a few toes firmly in contact with that center

Which is all to say my response to a current news event might not be quite what you’d expect of me. Many of you have heard the name Colin Kaepernick by now. Even if you don’t follow football, you are likely familiar with the silent protest he initiated during pre-games this season. The quarterback for the San Francisco 49ers has taken to kneeling during the national anthem, using the quiet act as a way to draw attention to the racial inequalities and injustices that sadly continue to eat away at the fabric of the nation, making reference to many of the events that have inspired the #BlackLivesMatter movement.

The reaction has been, too say the least, strong. Critics called it an affront to the troops. Sales of his jersey shot to the top, only so people could film themselves burning it in effigy. Police unions threatened to stop providing security to teams. Kaepernick was “dishonoring the flag”, using it as a “political tool.” His peaceful protest prompted a lot of not-so-peaceful responses.

I did not speak to the issue at first. Aside from a few conversations with friends, where I expressed my support for Kaepernick’s protest, I was slow to more loudly vocalize my feelings. While I could see opportunities for dialogue with white friends who failed to recognize the merits of Kaepernick’s protest—and who, furthermore, underscored the rightness of his protest with their own comments—I shied away from stepping too far into the fray. I didn’t know how (or even if) I should add my voice to the swelling chorus.

And then I was reminded of that aforementioned photo I’d first seen 16 years ago in Amherst, MA.

Unlike Kaepernick, the name Ted Landsmark may not be as familiar. 40 years ago, Landsmark was a young, African-American lawyer working in Boston. As he exited a T Station getting to city hall, Landsmark encountered a mob of white students protesting busing policies aimed at desegregating Boston’s schools. The mob attacked the 29 year-old lawyer, resulting in a now iconic photo of one protester, flag extended before him like a like a lance, paused in time, appearing to be mere moments away from driving the flag pole into Landsmark body. The white protester had, quite literally, grabbed his “right” flag and went out looking to stab someone with it. Landsmark survived his injuries, but if the purpose behind and reaction to Kaepernick’s protest is of any indication, the country's wounds very much remain.

I see these wounds remaining fresh, perhaps even growing deeper, when a NY Businessman running for the highest office in the land chooses not to lead, but instead bully others, all while wrapping himself in the mantle of the flag. I see the “right” flag waved when immigrants are called rapists, refugees labeled a dangerous threat, and persons with disabilities openly mocked. In their hands, every attack on an “other” is yet one more “right” flag being waved. It’s become a bully pulpit, literally and figuratively.

At The Leadership Program, we implement a bullying prevention program that emphasizes the role of the Upstander. Unlike the bystander, who stands by and does nothing (or even encourages the bully), the Upstander recognizes that something is wrong and does what they can to make it right. As I stated earlier, I’ve been a bystander to a great deal of injustice. While I’ve never encouraged the bully, neither have I always taken an active role in righting the wrongs they bring. I may criticize the bully while among like-minded company, but I might not address the bystanders encouraging him. The “radical centrism” of my college years was still rather deeply entrenched in my mindset sixteen-years later, enabling my desire to avoid conflict.

I’ve seen all too many people brandishing their “right” flags with little-to-no impunity. Friends who share bullying, offensive materials, and yet I’ve held my tongue, chosen to look away, allowed myself to self-censor one time too many. This turning away ends now. If I can be an Upstander my neighborhood, my community, my country needs, I can perhaps counter a few of those “right” flags being aimed at the communities we, at the Leadership Program, live in, work in, and serve.

Part of the Leadership Program’s mission statement is “building strong leaders in classrooms and communities.” I see Donald Trump on the TV everyday, saying he wants to be a leader…but I see little to no indication that he would build strong leaders. The bystanders supporting this aspiring bully-in-chief are among the quickest to denigrate Kaepernick and anyone who expresses support for him. But I can be an Upstander: For Kaepernick, for the community he represents, for the other Upstanders who have long been in the fray already. I can’t let my own personal fears allow policies based on fear to thrive.

October is Bullying Awareness Month, so it’s just in time.

How can you, too, be an Upstander today?

“Being Right, Being an Upstander: the Quarterback, the Candidate, and Me.”, The Leadership Program, 2016